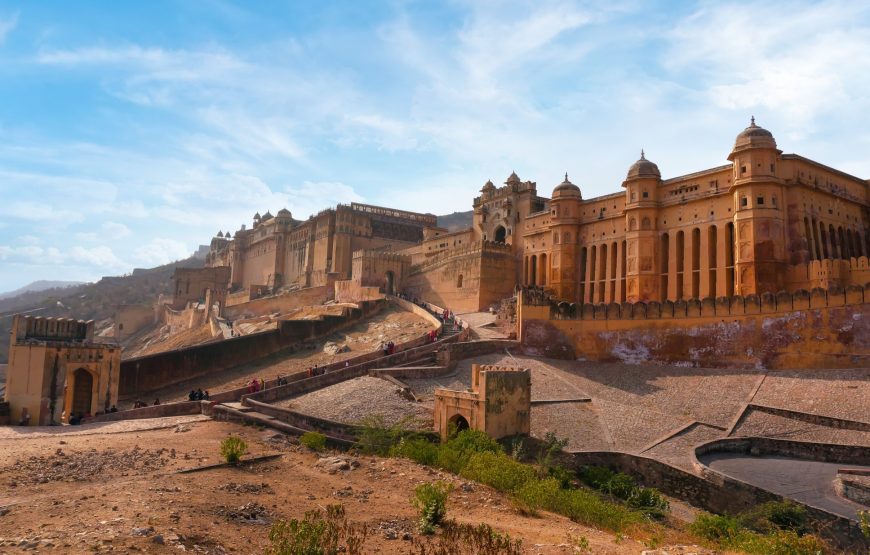 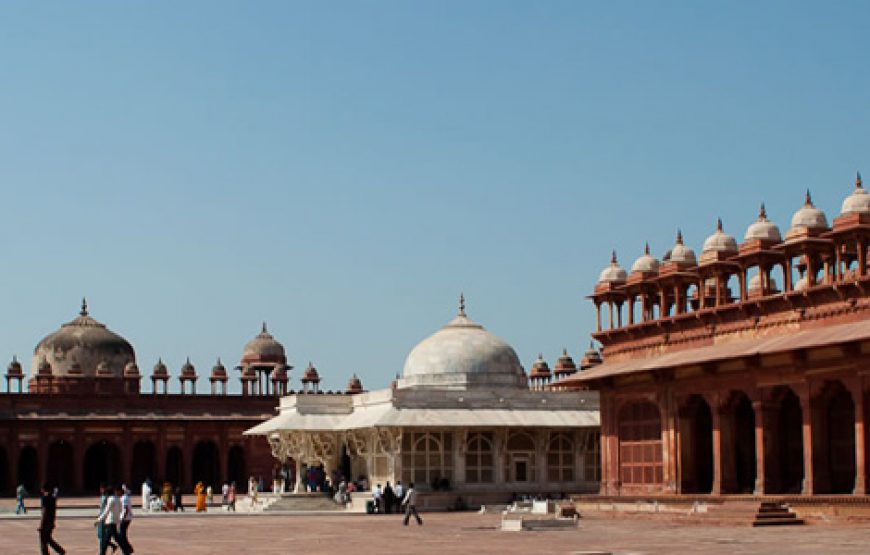 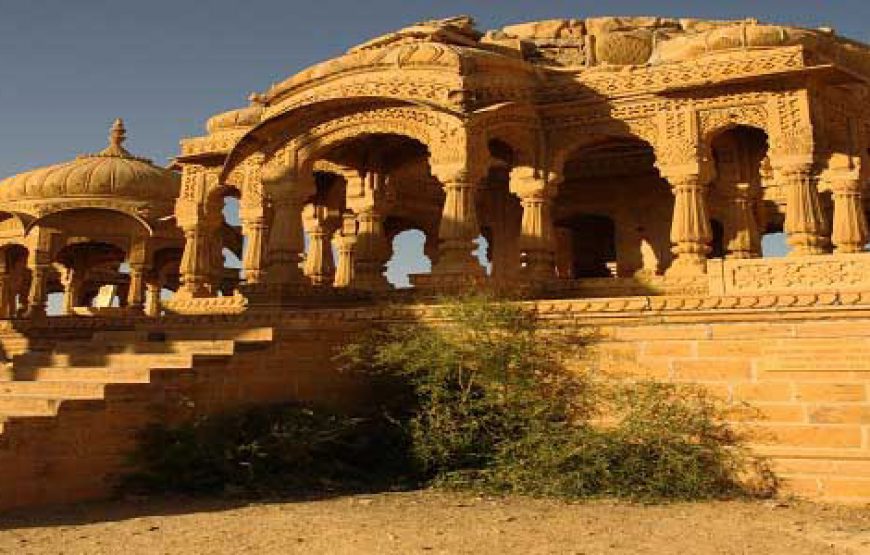 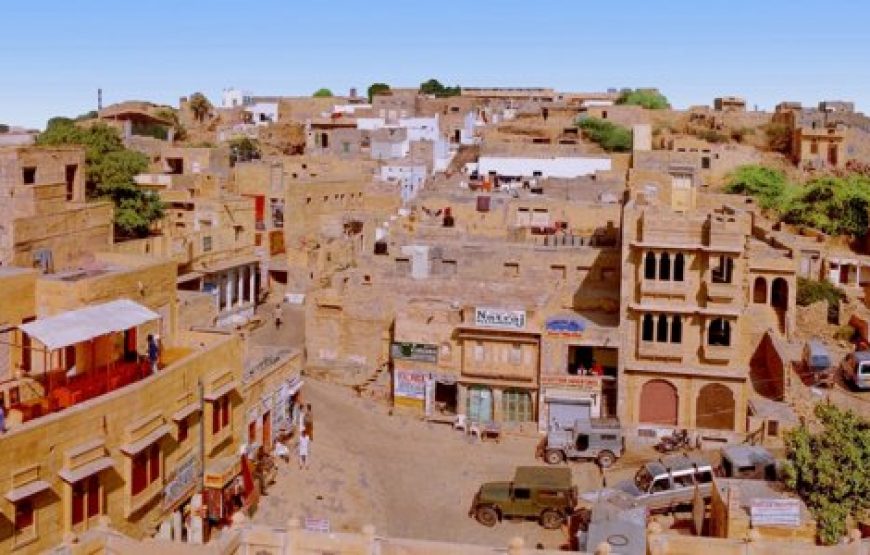 Arrive Delhi. You will be met and assisted on arrival in Delhi and transferred to hotel for overnight stay. Delhi is as modern or ancient as you want it to be. Today's Delhi is cosmopolitan, modern and fun loving. With feasts for art and theatre lovers, concerts for the musically inclined and food that can make a gourmet cry with delight, Delhi is a place with something for everyone.

After breakfast in the morning proceed for the half day combined city tour of Old & New Delhi. In Old city, drive past Red Fort built by Emperor Shah Jahan; Jama Masjid, one of the largest mosques in India; Raj Ghat- the memorial of Mahatma Gandhi and enjoy a walking tour in Chandni Chowk- the silver street of Delhi bustling with activity. Drive pass India Gate - A War Memorial Arch, the President's house, Parliament house, Government secretariat buildings. In the afternoon, drive 280 kms to Mandawa, often referred to as Rajasthan's open art gallery. Mandawa is a sleepy little typical Rajasthani town, which is deep rooted with culture. Evening free to explore the surroundings of this village.

After breakfast, explore the surroundings of Mandawa, which includes the medieval fort that gradually rises on the horizon like a mirage. A painted arched gateway adorned with Lord Krishna and his cows leads to the bazaar and later leave for BIKANER, (190 km). The city is renowned for the best riding camels in the world. This afternoon during your tour you will visit Camel Breeding Farms; Junagarh Fort, a formidable structure encircled by a moat and having some beautiful palaces within. Situated at a height of above seven hundred feet above sea level, it towers over the city and can be seen from a distance. The fort and its palaces are profusely decorated with magnificent stone carvings.. Return to hotel for overnight stay.

After breakfast drive 30 kms south of Bikaner is the village of Deshnoke, where the famous Karni Mata Temple is situated. The 600-year-old temple is dedicated to Karni Mata, an incarnation of Goddess Durga. The temple plays host to thousands of rats that form the major attraction here. The rats are considered sacred and worshipped accordingly. After that drive 333 km to Jaisalmer - a fairy-tale town in the Thar Desert founded about 800 years ago by Rajah Jaisal. Unlike any other city, this desert fortress is one of Rajasthan's most exotic and unusual towns. Jaisalmer, an important ancient trading centre because of its strategic location on the camel trade routes, is often described as the 'golden city'. The havelis, built by merchants of the 19th century, are exquisitely carved from golden-yellow sandstone and are still in a beautiful condition. The fort built in the 12th century, stands on the 80 meter high Trikuta hill, with beautifully carved Jain temples. The annual desert festival takes place in January and February each year and is a riot of colour and activity. Jaisalmer is also famous for its embroidery, Rajasthani mirror work, rugs, blankets, antique, and stonework and camel safaris into the barren sand-duned desert. In the evening, proceed for the excursion to Sam Sand dunes. Located at a distance of 42 kilometres from Jaisalmer, Sam Sand Dunes is the closest point to witness the total sandy desert. Moreover, Sam Dunes also provide you with an unforgettable experience of camel rides and the sunset. Overnight stay at hotel.

After breakfast, leave for the city tour of Jaisalmer. Visit the famous Havelis (mansions).The merchants grew prosperous and commissioned great havelis, or mansions, to flaunt their ever-growing status in society. Made of local golden yellow sand stone and wood, some of the havelis are still in excellent condition. The most elaborate and magnificent of all the Jaisalmer havelis is the Patwaon Ki Haveli, Salim Singh Ki Haveli and Nathmal Ki Haveli. Jaisal, the fort here stands atop the 80 m high Trikuta hill. 3 walls and features 99 bastions surround the fort. Over the centuries, the golden sand stone fortress witnessed many battles between the Bhatis, the Mughals and the Rathores of Jodhpur. Within the fort complex lie the beautifully carved Jain Temples built between the 12th and 15th centuries. The 'Maharawals' (rulers) of Jaisalmer were devout Hindus but were tolerant of Jainism, and encouraged art and religion. There are 7 temples in the complex - Chandraprabhu, Parasnath, Shitalnath, Sambhavnath, Shantinath, Kunthunath and Rikhabdev Temple. Afternoon drive to Sodakore for overnight stay.

After breakfast drive to Jodhpur. Representing this colorful city with shades of blue, Jodhpur has a history that is rich and a present that beckons strongly to the discerning tourist. Forts and palaces, temples and havelis, culture and tradition, spices and fabrics, colour and texture, Jodhpur has them all and in plenty. Every pore of Jodhpur tells its own tales of heroism that made legends out of kings and soldiers, romances that continue to warm the heart and a time when epics were lived out on the streets by everyday man. Visit the MEHRANGARH FORT in the afternoon. Considered one of India's best forts, this invincible stronghold of the Marwars sits on a steep hill lording over a wonderful view of its surroundings. It is also a beautiful fort and undoubtedly, the jewel of Jodhpur. Intricate latticed windows, elaborately carved panels and elegantly curved porches speak of beauty and taste. Also visit Jaswant Thada - a white marble memorial built in memory of Maharaja Jaswant II in 1899. A story goes that Maharaja Jaswant succumbed to injuries in this place while fighting the Mughal king Jehangir. Return to hotel for overnight stay.

This morning you'll drive through valleys in the remote and peaceful Aravalli Range to RANAKPUR to visit one of the most important Jain temples in India. This marble complex is noted for the 29 halls supported by 1,444 pillars, each adorned with hundreds of carved figures, no two alike. We'll continue driving south, arriving Udaipur, described as the 'City of Sunrise'. Overnight at hotel.

Udaipur is also a centre of historic arts and crafts of Mewar, like the Mewar School of Miniature Painting. There is of course the modern face of Udaipur that one can look at if interested, but given the other sights from a glorious past, modernity is no real distraction. This is a place that will hold you in its thrall no matter whom you are or where you come from. During a guided tour you will visit the following: CITY PALACE: Built in 1725, one of the largest, most beautiful palaces in the state of Rajasthan, the grand City Palace is actually a conglomerate of eleven palaces overlooking the sprawling Lake Pichola. It is now a museum, royal residence and a luxury hotel. This intricately designed monument is an architectural wonder in granite and marble. JAGDISH TEMPLE: It was built in 1651 by Maharaja Jagat Singh. This temple is dedicated to Lord Vishnu and is located in the centre of the old city. The temple has a black marble image of Lord Vishnu, which is unusual for the northern part of the country, where statues of Gods are normally in marble. Also enjoy a leisurely boat ride on LAKE PICHOLA (Subject to water level in the lake). With its main attractions being the two palaces on the islands in the lake, Jagniwas and Jagmandir Lake Pichola is about 4 km in length and 3 km wide. Jagniwas was earlier the summer retreat of the prince of Mewar and now a five-star hotel. The city palace extends along the eastern shore of the lake. Return to your hotel for overnight stay.

Today morning, drive for Jaipur. Jaipur, the capital of Rajasthan is popularly known as the 'PINK CITY' as the buildings in its old, walled city are all painted with pink-colour. Its foundation and its careful planning to the great warrior-astronomer Maharaja Jai Singh II (1699-1744). He laid out the city with its surrounding walls and six rectangular blocks by principles of town planning set out in an ancient Hindu treatise on architecture. The remarkable observatory, constructed by him in 1728, is still one of the central attractions. It is worthwhile spending any leisure time wandering through the bazaars. The place is well known for its beautiful carpets, enameled ornaments, precious and semi-precious stones, brass ornaments and many other arts and crafts. Overnight at hotel.

This morning you will drive 11kms in the outskirts of the city to visit Amber Fort, the ancient capital of the State until 1728. Visit the Temple of Goddess Kali, the Hall of Victory or Jai Mahal and Jagmandir. You can have the unique experience of travelling on elephant back to and from the top of the hill on which the fort is situated. Rest of the day is free to explore the colorful town independently. In the afternoon visit the Observatory, the Palace of Winds and the City Palace and Museum. The museum has an interesting textile section, which contains dresses and costumes of the former Maharajas and Maharanis of Jaipur. Return for an overnight stay to the hotel

Today drive to Agra en route visit Fatehpur Sikri, the deserted red sandstone city built by Emperor Akbar in 1571 in honour of the famous Sufi saint, Salim Chishti.The buildings, blending Hindu and Islamic styles of architecture and reflecting Akbar's secular vision remain in an excellent condition and it is a fascinating place to wander around. Agra was the capital of the Mughal court during the 16th and 17th centuries and its sublime monuments date from that era. The emperors Akbar, Jahangir and Shah Jehan governed their vast empires from here and as prolific builders; artisans from Persia, Central Asia and other parts of India were attracted by their patronage. The resulting luxurious palaces, tombs, forts and gardens dot the picturesque riverside region along the Yamuna River; three of which, the Taj Mahal, Agra Fort and Fatepur Sikri have been declared World Heritage Sites. Agra is renowned for its delicate Pietra Dura work; a Florentine technique imported by Jahangir of arranging minute pieces of precious and semi precious stones in complex, stylized floral and geometric designs into a marble base. Today artisans still recreate the old patterns. Visit the incomparable Taj Mahal, the world's greatest monument to love and devotion. Built by the emperor Shah Jehan for his favourite wife Mumtaz, its perfect proportions and exquisite craftsmanship took 20,000 workers almost 22 years to complete in 1653. It is undoubtedly a building as close to perfection as is achievable and its appearance changes magically with the light at different times of the day (closed on a Friday). Situated on the west bank of the Yamuna River, the imposing red sandstone Agra Fort was started in 1565 by Akbar. The fort surrounded by a moat forms a crescent along the riverfront and encompasses a huge complex of courtly buildings reflecting the varied styles of the Emperors. Wander through the lavishly decorated halls, courtyards and galleries discovering hidden pavilions and alcoves glimpsing the Taj Mahal in the distance. Overnight at Agra

After breakfast drive to Delhi, On arrival at Delhi on time transfer to Airport / Railway Station for your onward journey. 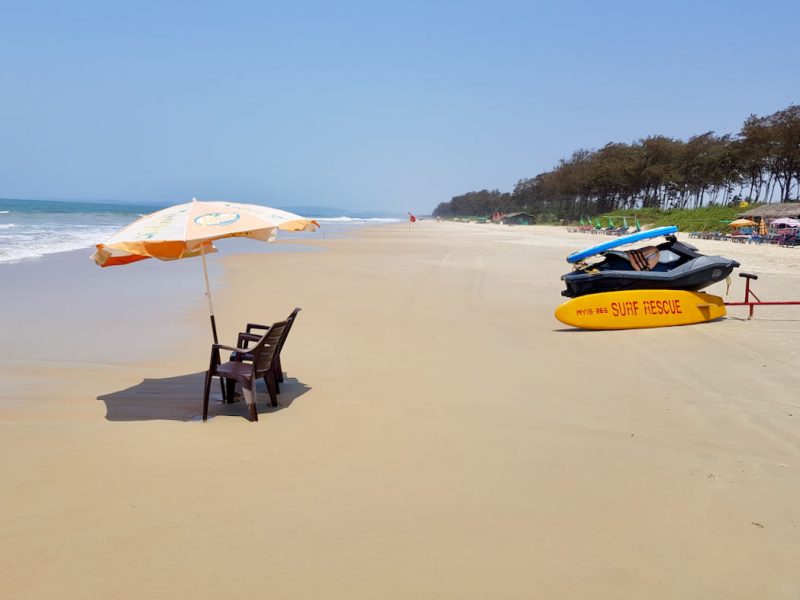