After arrival at Delhi, our representative will receive you at the airport and accompany you to the hotel. After taking rest, a sightseeing tour to Raj Ghat, Shanti Vana, Jama Masjid, Red Fort and the famous bazaars of Chandni Chowk. Later on afternoon trip to other parts of the city,India Gate (the War Memorial Arch), and the famous Lakshminarayan Temple. Drive to renowned President's House, Parliament House, and Government Secretariat buildings. Later drive to Jaipur. Break at the hotel and untangle yourself.

Get set for sightseeing after the breakfast. Your sightseeing journey will set in motion from Amber Fort, deliberately situated on a hilltop. The castle houses the marvellous Sheesh Mahal or the Hall of Victory, which has different aesthetic adjustment of mirror walls, floors and ceilings. You can travel to Amber Fort on an ornamented Elephant's back. It is absolutely an adventuresome experience altogether. Exploring the charismatic Jaipur-walled city brings to you the history of Rajput close to you. Old city of Jaipur was made by Maharaja Jai Singh II, on the curve of Shilpa-Shastra, which is the age-old Hindu architecture style.Maharaja Jai Singh II was a great astronomer and built Jantar Mantar Observatory, which was built in 1700's (A.D). Do not forget to visit the observatory as it will you a chance to get the feel of astronomical advancements in the Rajputana dynasty. Also visit City Palace which is the most spectacular palace in the city and Ram Niwas Gardens to feel the magic of Rajasthan. Later get back to your hotel room. Enjoy delicious cuisines in the dinner and return back to the comforts of your hotel room.

Today drive to Agra en route visit Fatehpur Sikri, the deserted red sandstone city built by Emperor Akbar in 1571 in honour of the famous Sufi saint, Salim Chishti.The buildings, blending Hindu and Islamic styles of architecture and reflecting Akbar's secular vision remain in an excellent condition and it is a fascinating place to wander around. Agra was the capital of the Mughal court during the 16th and 17th centuries and its sublime monuments date from that era. The emperors Akbar, Jahangir and Shah Jehan governed their vast empires from here and as prolific builders; artisans from Persia, Central Asia and other parts of India were attracted by their patronage. The resulting luxurious palaces, tombs, forts and gardens dot the picturesque riverside region along the Yamuna River; three of which, the Taj Mahal, Agra Fort and Fatepur Sikri have been declared World Heritage Sites. Agra is renowned for its delicate Pietra Dura work; a Florentine technique imported by Jahangir of arranging minute pieces of precious and semi precious stones in complex, stylized floral and geometric designs into a marble base. Today artisans still recreate the old patterns. Visit the incomparable Taj Mahal, the world's greatest monument to love and devotion. Built by the emperor Shah Jehan for his favourite wife Mumtaz, its perfect proportions and exquisite craftsmanship took 20,000 workers almost 22 years to complete in 1653. It is undoubtedly a building as close to perfection as is achievable and its appearance changes magically with the light at different times of the day (closed on a Friday). Situated on the west bank of the Yamuna River, the imposing red sandstone Agra Fort was started in 1565 by Akbar. The fort surrounded by a moat forms a crescent along the riverfront and encompasses a huge complex of courtly buildings reflecting the varied styles of the Emperors. Wander through the lavishly decorated halls, courtyards and galleries discovering hidden pavilions and alcoves glimpsing the Taj Mahal in the distance. Overnight at Agra 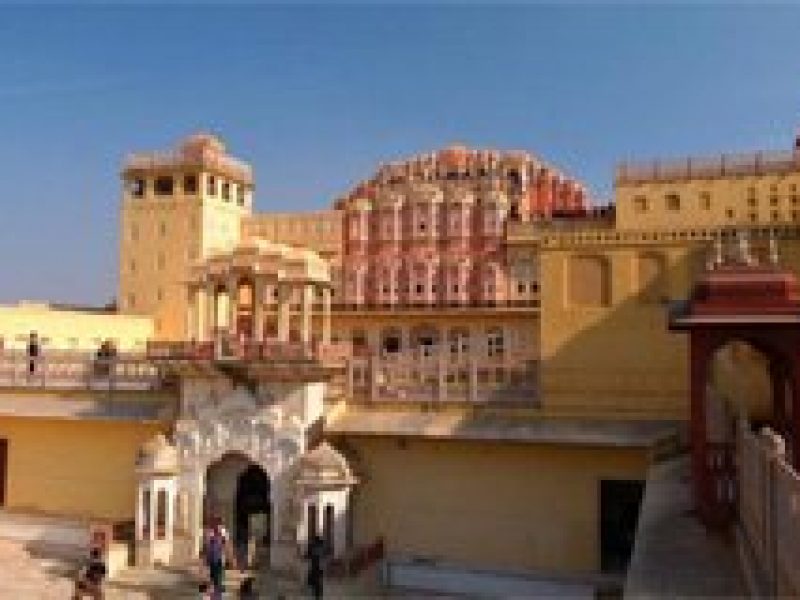